It’s been a little over a week since my paper challenging hereditarianism was published in the American Journal of Physical Anthropology.1 Already some hereditarians have attempted a rebuttal. One in particular by John Fuerst2 warrants a response at least partially because it is a component of a preprint that somehow found its way onto Biorxiv.3 Fuerst makes a few key claims:

I’ll address these points below.

Claim 1- No evidence of stabilizing selection

First, Fuerst claims that there is no evidence that stabilizing selection has occurred between Black and white population. This argument appears to be motivated by results from the model presented by Edge and Rosenberg (2015).4 The main finding of this paper plays a critical role in the logic of my paper. The authors demonstrate that “neutral trait differences are expected to have a magnitude comparable to the genetic differences at a single neutral locus” in other words the magnitude of group differences for a trait should match estimates of Fst, which are known to be comparatively small in humans. The authors argue later that divergent selection( where natural selection acts to make groups more different from each other) can produce phenotypic differences larger than neutral genetic differences and convergent selection (where natural selection acts to make populations more similar to each other) can produce phenotypic differences smaller than neutral diversity. This is represented in the figure below from Edge and Rosenberg (2015) 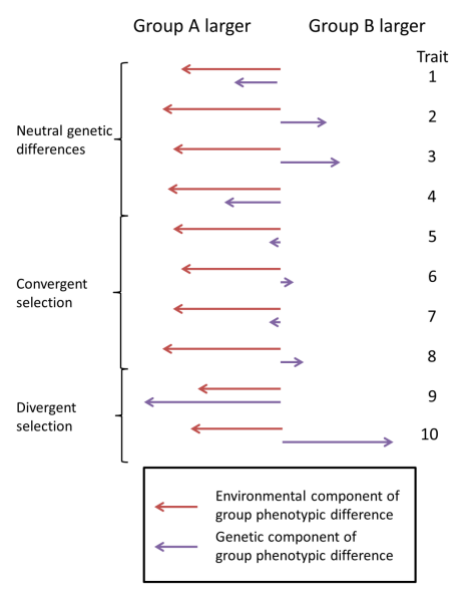 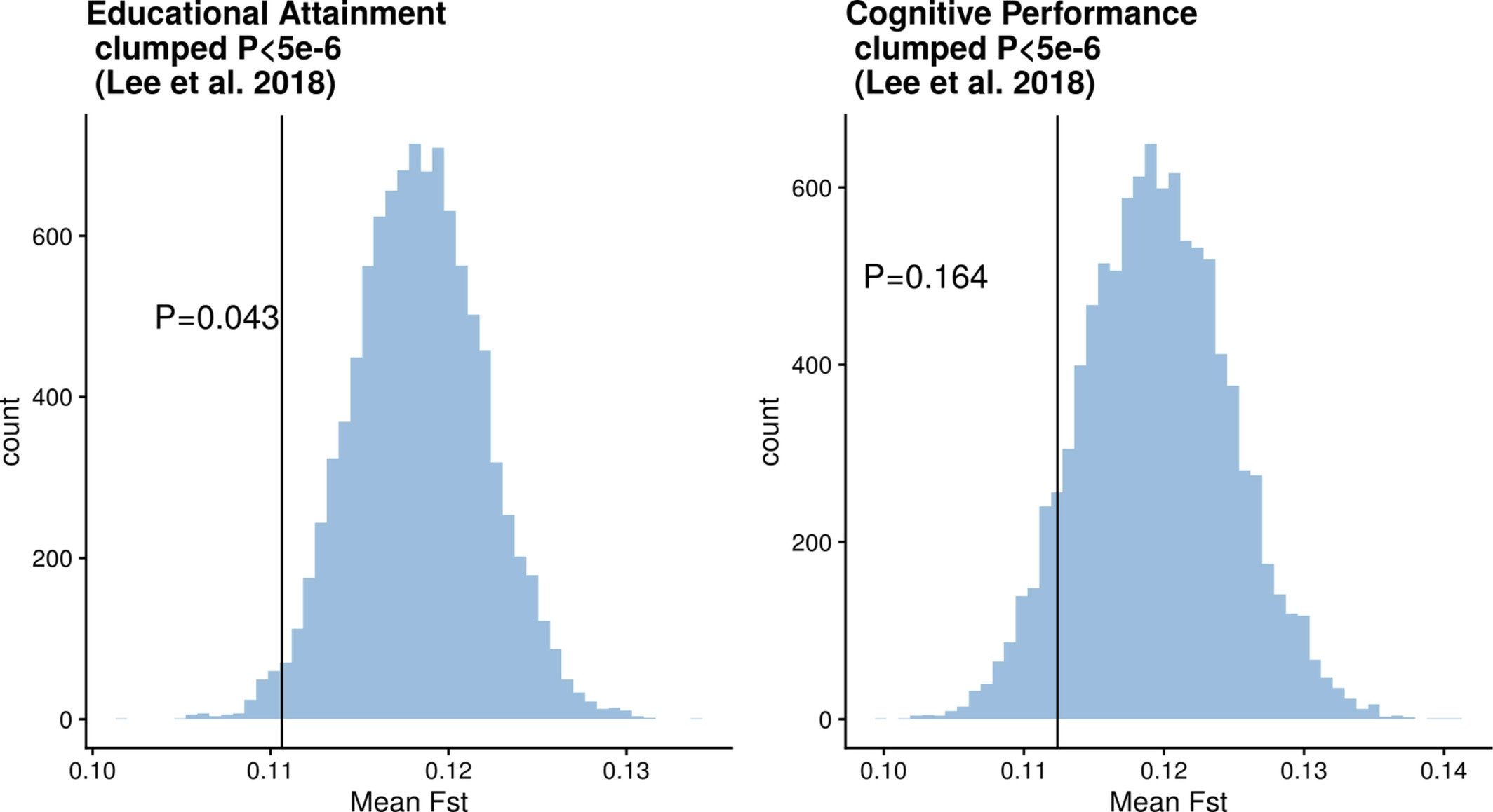 There are some other problematic and unjustified decisions made by Fuerst, one of which is the argument for scaling Fst based on Alcala and Rosenberg (2017)8. Fuerst in his equation 8 argues for the use of a maximum Fst of 0.7 based on Alcala and Rosenberg, but ignores that this is supposed to be an empirically observed value. The variants used in my study are not the genome-wide markers used to estimate that 0.7 value and so are ill-suited for this correction. If Fuerst wanted to do this correction properly he would need to empirically calculate the Fst max for the variants used in my study and scale by that factor. However, the issue of restricted Fst is most prominent for variants at low frequency, and GWAS do not typically detect variants at very low frequency because they require enormous sample sizes and great statistical power. In fact nearly 80% of the variants used to calculate mean Fst in my study have a minor allele frequency greater than 0.15, the point at which empirical analyses of the 1000 Genomes exome data have indicated constraint on Fst subsides. Likewise over 90% have minor allele frequency over 0.10 where constraint can be seen to be greatly reduced9. Overall it is not likely that Fst constraint is a major concern and it is certainly not the case that Fuerst’s “correction” is a proper course of action. Interestingly this is also a method with little justification that increases the genetic contribution.

Claim 3- My equation 4 is mistaken

Fuerst in a footnote implies my equation 4 is incorrect without any elaboration. Despite formatting and rendering issues in his derivation, I can clarify the difference between our two methods and why my approach ought to be preferred. Up until my equation 3 and Fuerst’s equation 11 our approaches are broadly equivalent and yield similar values with minor differences due to some decisions made by Fuerst in calculating his other parameters. These equations provide an additive among-group genetic variance, which can be compared to the among-group phenotypic variance to produce what would be equivalent to a “between-group heritability”. It is possible to move from this among-group genetic variance to an expected group phenotypic difference and this is where my and Fuerst’s methods differ. My goal was to estimate an expected difference, taking into account random effects from genetic drift as quantified by Fst. This randomness is incorporated by assuming a normal distribution, a safe assumption under neutral evolution10, and directly accounting for bias in the estimation of the expected group difference from the among-group variance that is introduced due to Jensen’s inequality11. Fuerst on the other hand, is not concerned with accounting for this bias and so produces an overestimate by simply multiplying the squareroot of between group heritability by the standard deviation.

That these two approaches are essentially identical can be demonstrated in a simple manner. Using my Fst value of 0.111 and a heritability of 0.35, Fuerst gets an estimated genetic contribution to the IQ gap of 8.85 (Table 1). If that value is multiplied by

Using the same heritability of 0.35 my equation 4. yields:

A nearly identical result. Because we are dealing with estimated values of among-group variance based on a model of random genetic drift it is reasonable, and preferable, to incorporate some of that randomness in the estimation of an expected value and not overestimate the group difference.

Ultimately though, Fuerst is squabbling over one or two potential IQ points which leads to the final claim.

On one hand it is difficult to know precisely what the hereditarian hypothesis regarding racial IQ differences is if you don’t do a little bit of digging. Authors frequently will rely on vague phrases like “the high heritability of intelligence suggests that large group differences might be at least partially genetically caused”.12 This also subtly implies the strawman argument from Rushton and Jensen (2005)13 that the anti-hereditarian position is exclusively 0% genetic contribution. Despite this, Jensen and Rushton conservatively state the hereditarian position is 50/50 genetics and environment13 but also that the “default hypothesis” ought to be that racial IQ differences are 80% genetic and 20% environmental.14 Alternatively Winegard, Winegard, and Anomaly (2020)15 argue that anything 20% of greater is consistent with the hereditarian hypothesis (this extremely broad claim came around for the first time suspiciously close to when I posted a preprint of my paper, arguing the racial IQ gap was no more than 20% genetic).

Under these conditions my results do not seem like a ringing endorsement of hereditarianism! The estimates from my paper, which I have defended from Fuerst’s objections, provides an upper bound of genetic contribution of 28% using an unrealistically high within-group heritability estimate. The more realistic within-group heritability values would range from 15% to 23% and because the method to estimate among-group variance makes assumptions that will overestimate genetic contribution, these values are almost certainly too high. Additionally the between group heritability, which has been a focus of the hereditarians for so long when argued to be on the scale of within-group heritability is less than 15%. So the hereditarian hypothesis, which is conservatively 50/50 is now overestimating the genetic contributions by at a factor of 2! The “default hypothesis” supported by Jensen, Rushton, and Intelligence editor-in-chief Richard Haier16 is at least overestimating genetic contribution by a factor of 4. Instead of 50/50 being a lower bound, it is now twice as large as the largest reasonable value genetics may contribute. Even worse, there is equal likelihood that genetics favors Africans over Europeans. While this is usually scoffed at by hereditarians because of the direction of the IQ gap it is perfectly reasonable for a neutrally evolving trait and it is perfectly possible that environmental disadvantage swamps genetic advantage, as portrayed by this figure from Rosenberg et al. (2019)17: 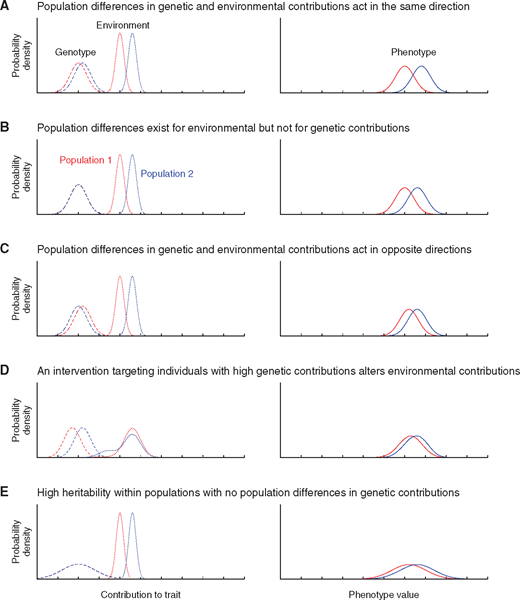 Compared to hereditarian claims, these results are far lower than suggested. They are also relatively uninteresting and insignificant compared to other sources of variation, despite references to arbitrary binnings of effect sizes into “medium” and “large” effects. The difference in test scores when an IQ test is immediately taken a second time exceeds this potential genetic contributions.17 So does the effect of a few additional years of education18, and even the range of IQ score differences that can exist between monozygotic twins!20 Considering that even these small contributions are likely overestimating the contribution of genes, and there’s no indication these genetic effects are intransigent to the environment, there doesn’t seem to be a need spend so much time and energy endlessly discussing the possibility of genetic contribution. Genes seem utterly inconsequential for race differences in cognitive performance.

1. Bird KA. No support for the hereditarian hypothesis of the Black–White achievement gap using polygenic scores and tests for divergent selection. Am J Phys Anthropol. 2021;1–12. https://doi.org/10.1002/ajpa. 24216

5. Jonathan Kaplan. Heritability: a handy guide to what it means, what it doesn’t mean, and that giant meta-analysis of twin studies. Scientia Salon. retried 02112021

20.Eric Turkheimer. Cochran on Zimmer and correcting an old misimpression.