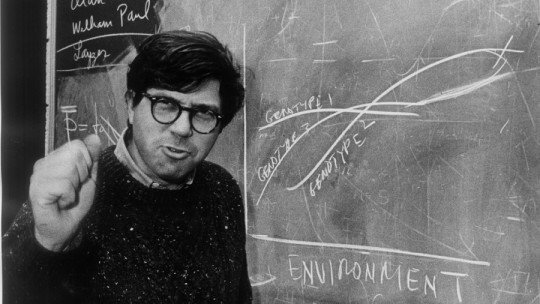 The news of Richard Lewontin’s passing yesterday brought me even greater sadness than I expected, especially given I’ve had no direct contact with him. For years now, Lewontin has been someone who has had the biggest impact on my development as a scientist and as a person. To me, he represents the model of what an academic should be and I imagine I’ll forever aspire to be. It seems to me the best way to honor his memory is to reflect on what exactly he meant to me and the innumerable ways his work has changed me for the better.

I’ve long felt drawn to politics and science and I can thank my congenital heart defect for both. On one hand, experiencing the struggle of a congenital health problem in the age when pre-existing conditions still disqualified you from health insurance made me very familiar with how much politics permeates everything. I saw my family navigate the burdensome bureaucracy to get me on medicaid and keep our household income low so I wouldn’t be kicked off. I grappled with why some political leaders seemed so intent on keeping people like me from being able to afford the care we need just to live. On the other hand, the impact that doctors and medical research had on my life has instilled, not just a fascination with science, but also a recognition of science’s capacity to make people’s lives better. So, while I eventually shifted away from medical genetics research to plant genome evolution, I’ve wanted to be a scientist since I was 12. In high school, I did speech and debate and science research events like Intel’s Science Fair. At Mizzou, I did undergraduate research and marched with my fellow students demanding racial justice and union representation. These two important parts of my life seemed separate to me, but I was always drawn to them both, trying to figure out how to balance them.

Sometime during college, I found Biology as Ideology and Not in Our Genes (and later Dialectical Biologist). Reading these works was a gestalt moment. Suddenly so many thoughts and half-formed ideas about how science is used to legitimize and support ideologies and how dominant social and political forces shape scientists, and science itself, clicked into place. He introduced and persuasively dismantled concepts like genetic determinism and reductionism and wrote about the flaws of capitalism and how modern research institutions were a product and willing participant in capitalism. He was unabashedly critical of racism and sexism and the science giving them a veneer of credibility. As I struggled to figure out how to balance science and social justice, here was someone who was not just a successful scientist, but preeminent, and an outspoken socialist and activist who resigned from the National Academy of Sciences because of their role in military research! In an interview filled with gems, Lewontin talks about how his father warned him not to get involved with politics, and how he ignored that advice. He talks about participating with his wife in a sit-in at a police station after a case of police brutality and starting a political group in high school. One quote puts my feelings into words better than I could:

“The fact of the matter is that as academics, we are supported by society in a pretty nice way. We have security. The claim is that intellectual life has a value of its own, but my development has been such as to believe that what you do – I mean, sure, you have to make a living – but to make a claim on the public purse, to make a claim on the resources of society, you have to do more than say, “I just want to satisfy my intellectual curiosity.” I mean, that’s the kind of mental masturbation that is not self-justifying, as far as I can tell. So you have to do political things – at least, I have to do political things.”

I kept these kinds of thoughts in mind when I ignored my own father’s concerns about being active in my graduate labor union’s leadership. I felt compelled to be involved to give back to society in some way. These thoughts gave me the confidence that I could sacrifice time in the lab to be on the union executive board during a contract bargaining year and as president of the union the following year; that my internal drive to try and change the world for the better wouldn’t alienate me from the career I’ve dreamt about for so long.

In fact, from Lewontin I learned that my passion for science and my drive for activism and social justice couldn’t just coexist, they could reinforce each other. When used properly, science could be an invaluable tool to advance social justice and progress. Equally important, science could be marshaled to defend against racism, sexism, and other bigotry. For me, one of the biggest takeaways from Lewontin’s work was the importance of protecting the integrity of science from those who seek to twist it for their bigoted ends. The importance of his 1972 paper The Apportionment of Human Diversity, for example, is hard to overstate. In it, Lewontin leveraged some of the latest developments in molecular biology to empirically demonstrate that racial categories have no solid foundation in genetics. This paper single-handedly weakened the standing of scientific racism to the point the core finding “There is more variation within races than between races” is a widely known fact. While the same scientific racism that he fought against has made a resurgence, I’ve tried my best to carry his torch and use my own expertise to push back on those who would warp science with formal scientific writing, and writing geared toward the public. The impact Lewontin made by lending his expertise to challenging the racist abuse of scientific authority was a major motivation for me to write my own paper empirically challenging scientific racism. A particular honor was writing an article in Science For the People, the radical science organization that Lewontin helped to found. In the article, I drew heavily on Lewontin’s work and critiqued the new genetic determinism brought on by the latest genetic technology. It only felt right to make the title a reference to Not in Our Genes, a book that was so critical to my development.

Of course, Lewontin’s writings, even when tackling the ideological abuse of science, weren’t just polemics. His papers like Heritability Hangup, Analysis of Variance and Analysis of Causes, and Spandrels of San Marco are not only strong attacks on the ideological misuse of biology, but full of useful insights on genetics and evolution. I constantly find myself referring back to thse papers. They’ve contributed to the scientific methods and reasoning that I use in my primary research. I learned to be careful with interpreting heritability, to value the experimental control afforded by working on plants, and the inherent difficulties associated with inferring natural selection, even when using sequence data. Likewise, in addition to being a glaring blow to genetic determinism and reductionism, his work about the mutual causation between organisms and the environment has transofrmed how I understand the causes of phenotypic variation in the plants I study. The way that Lewontin perfectly blends solid scientific foundation and insight into his social commentary and criticism is what I still find so stunning. He had years to continually develop an incredibly powerful and robust scientific program that genuinely informed his political views and arguments. In an interview he once explicitly stressed the importance of this:

“you must make it clear at all times – and it must be clear in your own mind – that the results you get in your science and what you say about science cannot be shown to be simply the consequence of your social attitudes. If I say that genes and environment are important, I have to have a firm underpinning for that within the scientific apparatus. I cannot say, “I wish that were true because I would like a world in which I could change the world, and therefore, I’m prejudiced in the way I report the world,” because that’s the first thing that your opponents will say: “Oh, you just say that because that’s your political ideology.” You’re justifying that political ideology by pretending that science has done that. The observations have to be there, independent of any justification. You have to distinguish between why you do a thing and what the result is. It may be that you are propelled forward to study the relationship between genes and environment because you have some political agenda, but what you say had better not be tainted by that. That’s very tricky and very important.”

The value in this isn’t just in maintaining credibility from critics; Lewontin’s body of work whether scientific or political are perfect complements. He was truly a great scientific mind, who was mindful of the limitations and pitfalls of science and used his scientific insights to improve his activism and social criticism. With such a foundation, it’s no surprise that in addition to his role as a critic of scientific racism and genetic determinism he is credited with fundamental work that started the fields of molecular population genetics and Niche Construction Theory and contributed greatly to multi-level selection theory.

The world has suffered a huge loss with his passing. Science is full of people who are brilliant, and Lewontin distinguished himself by not only being exceptionally brilliant but compassionate, courageous, and full of integrity. I hope to honor his memory by carrying on his lessons and following in his footsteps as best I can.